A way to show more people short pieces of Lore

For the past month or so, I have been making this Did You Know Destiny? style of lore. It includes grimoire cards in short pieces, interesting facts about destiny’s creation and world, as well as some of the deeper lore. I think it’s always a good thing to show people the hidden world of Destiny and Destiny 2 for the ones that haven’t looked into it.

Here’s an example of one I have shown people: 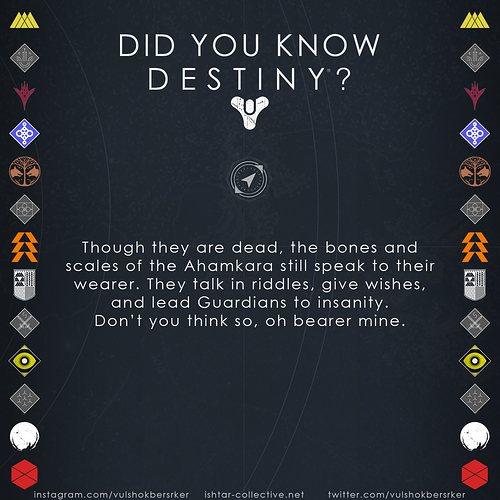 This is just my way to show the more causal players the cool, interesting story of Destiny.

Its a very neat idea on how to spread the lore of destiny.

So far I’ve talked about the voice actor behind the Hive, Osiris, Ahamkara, Oryx and the Touch of Malice. I add one to my twitter every few days. And people seem to like them. There are a few that point out my grammar errors though.

Grammar shammar who cares at least people are looking. Am I Right? I’m Right.

True. I’ve had some nice conversations about the lore from people in my comments. They want more Toland.

Everyone wants more Toland cause its a crazy person floating through hive space.

These cards have gotten a lot more popular. Now I have a lot of people asking me to do Osiris cards. I had to make a website to hold all the cards as a central way for people to look at them all. This makes me happy to see all the people who love the story in Destiny.