Could the Cover Art for The Book: Unveiling Be Symbolic For The Future of Destiny? 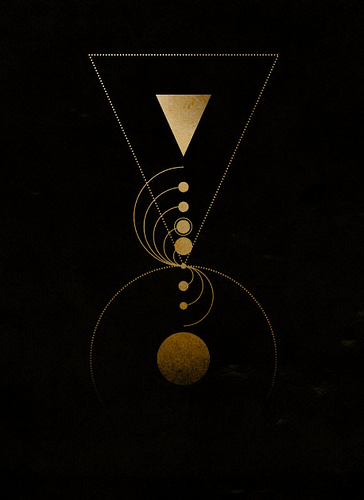 So I was looking at The Book: Unveiling’s cover art and it made me wonder if there was there was any significance behind the design. It’s pretty clear that the large circle in the middle is our sun and the rest of the circles are the planets in order of distance from the sun. So, Mercury, Venus, Earth, Mars, Jupiter, Saturn, Uranus, Neptune and Pluto (maybe). On the outer edge of the image, is the large triangle which we could assimilate with the Pyramid. This connection made me think that the large circle could be representative of the Traveler instead of the sun, given that the contents of the book describe the interactions between the Winnower (Pyramid) and the Gardener (Traveler). In addition to these connections, there is an outline or perimeter (dotted lines) that both shapes share. The perimeter of both shapes converge on the 4th planet from the center, Mars. Why wouldn’t they converge on the 3rd planet from the center, Earth? Probably because the setting in The Book: Unveiling takes place in the Black Garden which I think technically belongs on Mars. Which makes me think that Mars is some kind of neutral zone, much like the Reef (the asteroid belt located between Mars and Jupiter). Now considering the planets that we’ve been to, Mercury, Venus, Earth, Mars, Io (Jupiter), and Titan (Saturn), we still haven’t been to Uranus, Neptune and Pluto. Now, Uranus and Neptune are both gas giants, so I could imagine that if we visit these planets in the future, there will be landing zones on the moons of these planets similar to the moons of Jupiter and Saturn. We know a little bit of what we may encounter on these outer planets from the Drifter’s perspective, with him being the only living entity other than Callus that has traveled that far. I think its pretty obvious that moving forward, the game will be forcing us to take the offensive to the outer edge of the system of these planets beyond the Reef, in Darkness’s territory. Let me know your thoughts on this analysis. I know I may be off a bit, I just think it’s an interesting topic of discussion.

I don’t know if anyone here has seen the cutscene between Osiris and Rasputin, but I guess I could add to this that Rasputin is in neutral territory.

Rasputin being in neutral ground is immensely important, especially since his warmind vault is on Mars, the center of the spirals on Unveiling.

Something in me is hesistant about that: it seems coincidental, but I understand why others believe it and it makes sense, especially after the cutscene was revealed. I guess it supports Rasputin’s position of being a “Guardian of Humanity” - Light and Humanity being seen as seperate to the Warmind. Rasputin said that he learned from the Darkness, from IT. I don’t think Rasputin would abandon Humanity again, but I’m not sure if Rasputin would see Humanity aligned with the Dark. Guess we’ll know soon enough what his intentions are.

it could be a little more symbolic - rasputin is right in the middle of the fight? It makes sense given your mention of the Osiris Rasputin cut scene and the question Osiris had for Rasputin. Its probably more symbolic that the lines connecting the planets are converging through Mars. I wonder what that is symbolising?