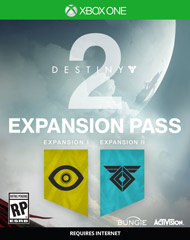 Finally, we will learn more about Osiris and second DLC, we’ll see on wich side Rasputin is!

Dante and I are hoping to meet Shin Malphur. Personally finding out where Saint-14 is would be nice too.

I’ve always had a weird feeling Saint 14 is with Osiris so I’m hoping they’ll expand on that a lot, plus just weave some of the loose threads together. I’m also crossing my fingers they work the Grimoire more into the game as its truly incredible storytelling on these cards.

First of all, I hope that these DLCs are like TTK sized. Activision did say that they’ve invested in assets for Bungie to avoid content droughts.

I’m happy about what the expansion icons are suggesting because this time it would really fit into the story of the base game which is to regather human forces to establish an HQ/safezone/home anew in order to fight back the Cabal.
The 1st DLC could be about finding a new speaker & since Osiris left the Tower in disagreement with the Speaker, the appearance of Saint-14 could bring some dynamic into our side of the story.
The same with the 2nd DLC, we might finally see where Rasputin stands & maybe we’ll get some light into the whole Felwinter-Rasputin relationship. It could also be an opportunity to finally introduce the Seven Seraphs (in case the speculations about them being related to Rasputin turn out to be correct).
In general I have this feeling that in D2 the factions might actually have a bigger inpact in the story. There was a sneaky emphasis on New Monarchy within the teaser & story trailer.

I really think that the whole lifecycle of D2 will be focused on us guardians, on humans maybe even in-game entrance of the Concordat, the Shadows of Yor, the mysterious place Efrideet’s talking about & maybe even the Nine.

I think it will be “Osiris’ Oasis” and “the Warmind War” but we will have to wait and see:-)

I see what you did there.

Charlemagne would be cool. I also hope they add the grimoire to the game.

Remember too that The Dark Below and House of Wolves were set up like this for the D1 - two expansions included in the pass, so my guess is they may be about that size, especially if they are late fall/winter and spring. For content I definitely think we may get some story about Osiris and Rasputin. I think it would also be cool if we finally got to go to Charlemagne’s location and maybe in a twist one of the Warminds is attacking the other trying to take it over and we have to figure out and help which on is on the side of tower and which is corrupted into darkness.

We might get a Darkness based subclass because Osiris was kicked out of the Vanguard Commander position because he messed with the Vex.