Dead Orbit and the The Darkness

While I was listening to a podcast discussing the faction Dead Orbit, a question arose in my mind. The faction D.O. has taken the stance that Earth and its Solar system is lost to humanity, and the only chance of survival is to leave and spread out as much as possible so that it would be impossible to find and wipe out all of humanity. We know D.O. is preparing a fleet to leave, and its only a matter of time before they do…

Hence forth my question;

Why haven’t they already left?

Staying for the sake of the Vanguard does not make sense. D.O. are not getting anything out of it in return for their services that would help them.

Perhaps they are still building their fleet, but in CARD it talks about their Fleet in the present tense, which makes it reasonable to assume that the fleet in some capacity already exists. Which raises another interesting question regarding their strategy. If they wish to spread and not just relocate, then why are they not already sending out colonists? Would it not make sense to progressively send small groups of the fleet out in many directions, while maintaining a presence on Earth? Once they have started relocation and colony building, send through more ships to strengthen the new colonies and to push further outward into the universe.

We cannot leave because humanity has been cut off from the rest of the universe by the Darkness.

We know the traveller tried to leave and was crippled (by whom and how is not important here)
Humanity experienced a fatal crisis that wiped out most of the population in a very short period of time. (The Darkness?)
It was not instant, but still fast. We see very few signs of evacuation on Mars or Venus, but the Cosmodrome is packed full of a half organised but chaotic evacuation that quickly spiralled out of control due to sheer volume of refugees and what ever the ‘cataclysm’ was. (The advance of The Darkness?)
Colony ships did get off the ground, hence how the Awoken were born. (The exposure to the Darkness & Light.)
The Traveller released a pulse of light that pushed the Darkness back to the Jovians. (The boundary between normality and The Darkness?)

We are lead to believe that the Darkness is an all pervading unstoppable force, then why would it be halted completely by the travellers light? We can presume that the pulse of light expanded across our solar system in a three dimensional wave. Creating a bubble around which the Darkness flowed over and around? Or did this pulse stop the Darkness in its tracks completely?

Im thinking that Earth and the solar system is in a little bubble around which the rest of the nearby universe has been taken over by the Darkness. Which is why D.O. haven’t left yet. They can’t until they figure out a way to get beyond the Darkness.

Feel free to tell me I’m wrong. (Please, just do it nicely, and with links to Grimoire)

Ugh, don’t listen to me. I just picked a huge hole in my own theory.

@Arcmind remarked to me that I found a big plothole when I wondered why the Fallen hadn’t taken the Traveler before the City Age but then I poked a hole in my theory using the House of Wolves, saying that the Fallen’s full strength haven’t arrived into the solar system yet to do anything.

On that note, you mentioned the Cabal and Fallen.

Mars has an orbit similar to Earth’s, so the Cabal Exclusion Zone would be based around that orbit depending on where Mars was at that time of year. But that doesn’t make sense, so those warships we see in The Flayers strike? There’s gotta be more of them, plus the Cabal carriers, and if Dead Orbit’s fleet caught their notice good bye and good riddance (ahem, that’s the New Monarchist in me).

And then there’s the Fallen and their Ketches. Individual Guardians in their jumpships, either in a fireteam or raid team, can go anywhere undetected and the Awoken generally keep to their own except during the Reef Wars and when they attacked Oryx (looked how well that turned out for them). If a colony fleet went anywhere a Ketch is bound to drop on them.

So its not that Dead Orbit doesn’t have a way to leave the system because of the “Darkness”, its because of space-capable enemies that can get them, not only that but also there’s probably few interstellar drives or other objects of that nature discovered to be equipped on all or most of their ships.

This post is great!
Makes a lot of sense and I agree with feeling that we’re surrounded by The Darkness.

What if they got here before the Darkness recovered and started closing in?

In some aspects of this I’d agree. The Darkness is out there, and if not the literal Darkness at least remnants of its devastation. The Queen of the Reef sent Skolas as a gift in apology to the Nine, what if Dead Orbit were to accidentally walk into land they’ve claimed?

The Dead Orbit Ghost Fragment talks of a keyhole, how many of those are throughout the system?

There’s a lot dangerous possibilities here which would cause a bit of caution. No this doesn’t mean they shouldn’t leave, but think realistically. Could they actually be ready to LEAVE The system? That’s a tall order, we don’t even know how successful the original deep space explorers were.

It could simply be they plan on leaving but at this point it’s not in their best interest, especially with the events of “our” Guardian. Each Faction has a quote on how we’ve individually affected them. It could be they see what we’re doing, not as saving the system, but certainly buying it time. And if there’s 10 hours to pack your house before a mass evacuation, why only take 2?

I keep thinking about how they have a representative in the Tower. Not necessarily the fact that someone in the Consensus wanted them in the Tower, but the fact that they accepted. Could be they wanted access to resources. Could be they wanted access to Guardians. The Dead Orbit folks aren’t stupid-they know what’s out there, and they’re going to need some protection. They may have a fleet ready to go but they need some bodyguards if they’re going to get far enough to keep humanity safe. Perhaps they’re waiting for enough Guardians to sign up with them before they head out.

You bring up an excellent point! I was mostly trying to come up with a reason why they would accept being part of the Consensus to begin with, and not just flee as soon as their fleet was ready.

I personally believe that Dead Orbit have links to the Exodus Project, a Golden-Age colonisation attempt which tried to get Earth’s citizens off-world before the Darkness arrived. The obvious link would be the fact that a lot of their gear makes use of the word Exodus, but their motivation and philosophy are also very similar: Escape before the worst arrives. During the Golden Age, the arrival of the Darkness was predicted by Rasputin, and this prediction is what inspired the Exodus Project to take action, which makes me think that Dead Orbit may have a connection to Rasputin. Perhaps they’re waiting for him to signal the right moment to leave. And I’m just saying, that stylised skull on their logo looks a lot like a 7… as in Seven Seraphs, perhaps?

Completely disagree with the Seven Seraphs

Rasputin isn’t helping or cooperating with anyone, much less Dead Orbit.

Rasputin didn’t predict the arrival of the Darkness; he saw a mysterious phenomena over three-fourths the size of Saturn happen outside the solar system he flagged acausal, and sent out a system wide alert.

The Exo were probably developed after research from the Ishtar Collective working in conjunction with Clovis Bray, expanding upon those proxy suits the Collective members wore to explore the Vex network into a full robot capable of housing a human intelligence.

Dead Orbit’s interest in Rasputin is what he holds. He has connections to everything military in the solar system, and it was their codes that we found which reawoke Rasputin a second time to take control of the interplanetary array. He likely doesn’t care about them given MIDNIGHT EXIGENT.

There is a reason the factions are in the tower. They want help, they need help. Dead Orbit might remain here simply because they do not have the man power or technology to leave. They may be trying to obtain what they need to leave. They also may have a bigger picture in mind. They don’t just want to leave, they think it is the only hope for humanity. They aren’t going to leave humanity behind. They want to bring everyone with them. Dead Orbit is trying to gain allegiance and power so they can create a full scale evac for the City itself, not just their followers.

They already have the ships they need to leave. My guess is that they need help.

Here is my theory. The Future War Cult have been sending volunteers into a device that is somehow connected to the Vex network. But the people who volunteered were going insane 10 to 20 minutes after entering the device. So they repaired a dead ghost they found in Tibet and sent it through their device

Take a look at this 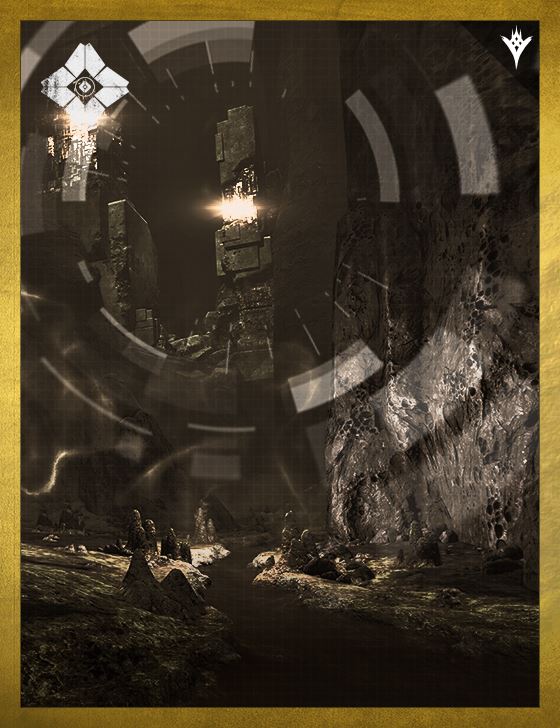 A starfield. The stars swing slowly across the Ghost's field of view, just darkness and the blazing fury of distant suns as the Ghost tumbles through empty space. Hours of this before, with a wash of power, a huge convoy of ships drops into reality...

Could it be that the Ghost on A-113 that found the Arach of Dead Orbit by exiting the keyhole that was connected to the FWC device? And if so, did the Arach send that ghost back to the tower and that’s how the Dead Orbit found out about Ghost Fragment: Vault of Glass 3? Or did the FWC recover that information and used it to convince Dead Orbit to look for help through the other factions and the vanguard?

It is also worth noting that the Queens emblem was not on any of the ships described in that fragment.

I agree with this theory, but have a few questions.

Was it explicitly stated that the ships didn’t have the Queen’s emblem or not mentioned one way or the other?

Also, did the ghost come out of the keyhole for certain when Dead Orbit was there?

The Arach stranded on A-112 said

“I didn’t think the traveler sent its ghosts out this far” So I’m just speculating. The keyhole drove some of the crew mad just like the volunteers inside of the FWC device.

The other fragment only said that there were emblems belonging to all factions as well as some not represented in the tower to date. So it could be a possibility that those ships were representing the queen.

Typing this sparked something in my brain meat. The Sophia got shot down by an Awoken ship, The end of TTK implied that the queen is still alive. Could it be that those ships are fleeing from the Queens forces?

I just wish I knew the timeline of these fragments.

We can definitely date GF: Dead Orbit from before the Reef Wars as they mention A-113 (not 112) is near Ceres, which the Queen obliterated with her Harbingers. This would fit more in line with the Awoken’s isolationist stance until the Wolf Rebellion. That would explain why Dead Orbit’s fleet got anywhere close to Saturn in TTK and were called off by Zavala.

“Too late. Returning. How many? Hold position, kill the engines, and don’t let them find you”