Designing a new format for Transcripts

Recently it’s become clear to me that the format that we use for Transcripts isn’t good enough. In order to get Transcripts built quickly I repurposed Markdown syntax, but now I think we need a new format.

I’m trying to figure out all of the different kinds of things that the new format needs to be able to deal with. So far I have:

Is there anything else that we should be able to capture?

Maybe optional dialogue could be where we include Ghost Scans (or their equivalent)? Or maybe note that there is a step of a Lost Sector or Adventure in this mission? (Assuming that is a thing)

That’s an interesting idea! Using Ghost Scans as an example, I wonder if it makes sense to allow references to other Transcripts, and then it could pull in the text from that Transcript.

What about items? Some of the missions are fetch quests or ones where we end up finding something to pick up. For example; the Strangers rifle, or The Cult Ghost we give to Lakshmi. The gate lords head we toss at Lord Uldrens feet etc.

I wonder if it might make sense to have a generic way of ‘referencing’ other things in the Archive, whether they were Transcripts or Items or Grimoire Cards or whatever?

Yes!
Thank you for collecting suggestions because there’s been something on my chest for a long time.
How about if we add a drop down box of sorts or some sort of radio button that allows us to switch between variable dialogues.
(The ones that change every run)

Optional Dialogue EDIT:DISCOVERED [quote=“TheAxrat, post:13, topic:595”]
I also have some lines that play if you stall on certain parts of the strike.

Before launching onto the drill:
[/quote]

Alternative Dialogue, YES definitely (Transcript format could be improved upon however)
Actions, I think they are good in italics as is and are definitely noteworthy for a reader and help them follow the story.
Movement from place to place, same as the “Actions” paragraph.
I hope my input helps! I would be glad to offer more if you’d like.
;p

Descriptions of what is going on, especially in the cut scenes really needs to be improved. Plus we now have a mute guardian who conveys thought and emotion via head tilting.

I had some fun with some coloured pens. 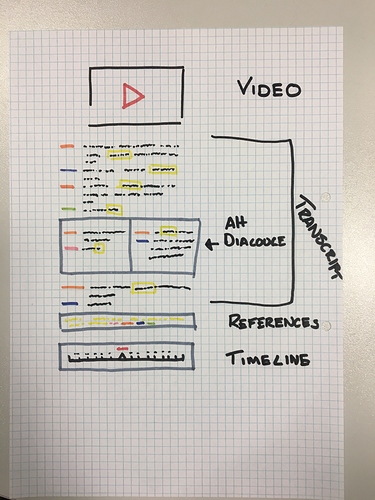 As for the tImeline section, I love this addition as well but feel that although the story of Destiny spans many centuries, the in-game story takes place in such a small expanse of that timeline, not to mention that the Vanilla story has been reshuffled once before. That does not mean that it’s not possible to accomplish though. This opens my brain up to a host of ideas and things I want to play with now. Look at what you’ve done!

whopps, my mistake, I thought http://destinytimeline.com/ belonged to you. In my head I had a fixed width but scrolling timeline with Events and mission titles spaced out. To be fair, I wasn’t thinking of it as being to scale, just chronologically. so if you were on a transcript page or a historical event page (ie: battle of 6 fronts) the timeline would appear in the bottom to give you the general idea of the event preceeding it and what came next. IGN do it with their walkthroughs. At the bottom of a chapter page it lists what mission you did before, the next mission and any branching story quests all in a horizontal type box.

The fixed with thing goes for the alternative dialogue. Ive seen it done before, a page has an invisible box with multiple items that scroll either with a mouseover, mouse click or drag. The top bar of https://www.ebay.co.uk/ or http://www.sciencemuseum.org.uk/ or if you scroll down past the video https://bellroy.com/products/phone-case-3-card/i7/blue_steel#image-8
So the idea would be, it wouldn’t matter how many versions of dialogue there were, you could just scroll around. It keeps the page width consistant, displays the alternative text without jumbling it up and maintains the format of the transcript (ie: vertical travel represents chronological sequence)

References, I only had a vague thought about them. Its already sort of there. We have the Categories function, but more than that, lots of things in the transcript point to, reference or link in with other grimoire, items and transcripts. For instance, in the Homecoming Mission;

I would expect to see clickable links to-
Ikora Zavala, Cayde-6, Ward of Dawn, Ghost ,City Hawk, Cabal City Plaza, Golden Gun, Shaxx, Tower Hanger, Red Legion, The Traveller, Red Jacks, The Speaker, Sweeper bot, Nova Bomb, Amanda, The Immortal, Ghost Scans, BRANN- THE UNBENT BLADE, KRETH- THE LIVING SKYFIRE, Ghaul.
Its like those really annoying news sites (annoying because of how many adds they have) that as you read an article, loads of words are hyperlinked (in annoyingly garish ways) to other articles containing similar topics. However, it doesn’t need to be annoying.

I also need to add…
I know nothing about any of this. I just had coloured pens to hand, a spare 5 mins and a bit of imagination.

@pirate_dani You do realize that without imagination, we would have nothing, right? Thank you so much for the inspiration. I cannot promise that this “will” be implemented, but I can promise you that it has inspired me.