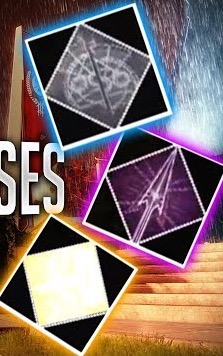 In a video linked here, we see the talisman being acquired by a guardian.

Now, before I leave, there are two images:

These show a Warlock gaining his Stormcaller abilities back. With the information, we can put together a potential chain of events. A guardian regains all of the talismans via loot chests, etc. Then, he rekindles his/her light by defeating enemies and Public Events. Then, you bust out a Super and disentegrate your enemies.

So maybe it will accumulate in a story mission as in TTK or do you think it will just be something you charge up and it automatically unlocks(These are some ideas that Bungie might use)? I’m just wanting others peoples ideas on this.

I think that we will regain our first two supers (by which I mean Voidwalker, Gunslinger, Striker, etc.) via a story mission. I am pretty sure in an IGN First video they said something about visiting the shard of the Traveler in the EDZ to regain our light, and that there were already enemies there competing for it.
However, our third supers, (The Taken King subclasses) we regain via these talismans, as I stated above. There are videos from My Name is Byf, Unknown Player, etc. if you want to check them out.

I’ve seen Byf’s video on it.

I think that we will regain our first two supers (by which I mean Voidwalker, Gunslinger, Striker, etc.) via a story mission.

I haven’t heard about that though. Sounds kind of cool though. Having to fight powerlessly against most likely Cabal and Fallen(Possibly Hive?). Even the thought of that sounds exciting!

Same here. Hopefully we at least get some good guns.

Same here. Hopefully we at least get some good guns.

Yeah, I just watched a video on it. At the end of each questline I think you go to the EDZ shard to reclaim your light?
Hopefully these quests are fun and interesting, not just a grind!

Agreed!
I was thinking of something like NO GUNS!
Just your melee as you try your BEST to survive against tough enemies.
It’ll really make you appreciate your light and weapons.

LOL Nechrocasm for the win if you wanna do that.

I highly doubt you’d survive if that happened.

I was being silly. lol It’d be neat.

Dang I need to work on reading sarcasm

I think he means the intro to the game.
Not like, going through the ENTIRE game with bad guns.
EDIT: Just read you reply, forgive me senpai.

I was so relieved when this news came out. I mean, I had expected about as much, but I was very slightly worried that my Nightstalker trash self wouldn’t be able to fulfill his bow-and-arrow needs.