I have been working on a universe called dov Veren for seven years. I just want to share O3O get feedback and improve my writing.
The Demarri:
“Beyond our world is a world like no other. The third real, home to the beast gods. Home to the Demarri." Rhea
The Demarri are a race of gods that go into universes and destroy them completely. They have destroyed billions, if not trillions of universes. They are hell bent on bringing eternal chaos to the multiverse. They love making deals and bringing mortals down to their knees. Their enemies are the night lords and the demigods. They are not bound the rules of causality or any rule within reality as they come from another universe altogether.
They are ruled the Demarrius Gods, six beings that exist beyond the rest of the race.

Demarri card one:
It stood there before the men, covered in armor no material could match. The shoulders were the most armored, it extended from the shoulders to its neck as well as covering part of the arms. its helmet was in the shape of a large hook pointed at their direction. Its limbs were lightly covered in the same material. On the shoulders were large holes, made for an unknown purpose. Two large blades were stuck within its chest, the handles of the swords facing toward them.

The skin was a grey purple color, only its arms and legs were showed flesh. The hands were locked on both handles, glowing a hot red with a translucent effect.

They stared at it for a moment before noticing it moving one of its hands. With great pain it ripped one of the swords out from the chest and sliced the air in the men’s direction, sending a beam of energy towards them. They only realized it until it was too late, their screams filled the Third realm with joy. They tired fighting back but it proved fruitless. Within only a few minutes they were ripped to pieces, body parts littered the ground. It was pleased with the blood shed, the chaos it generated.

Without using much force, it planted its sword into the ground. Like it was enacting some kind of ritual, the blade itself began to glow a hot red. Metaling the environment around it. Breaking down the walls that held its home away from reality. The creature roared in victory, as many more came down from the third realm. The Demarri invasion had begun.

Demarri card 2:
“They are vast and beyond understanding. They make deals and bring desired out comes. They shape reality for who ever wishes but it is all a trap. A sick game they play.” Lysander

I know them. I see them here and there. Far and wide. Harbingers of death and chaos. They bear weapons deep in their chests, I do not understand why. My site does not allow me to look at the Divine. They are chaos and chaos is them. Interlinked in away no one can comprehend.

They transcend many layers, above duality and causality. This I fear, the horror they bear. Gods among the mortal, the weak seek them to become immortal. Only to be made into pawns. Which will be devoured by their spawn.

They come with blades older than Stars. These blades crave our fates and make them final. Wicked things they are. Things are not burdened with souls. Only a ravenous hungry to devour all that is. 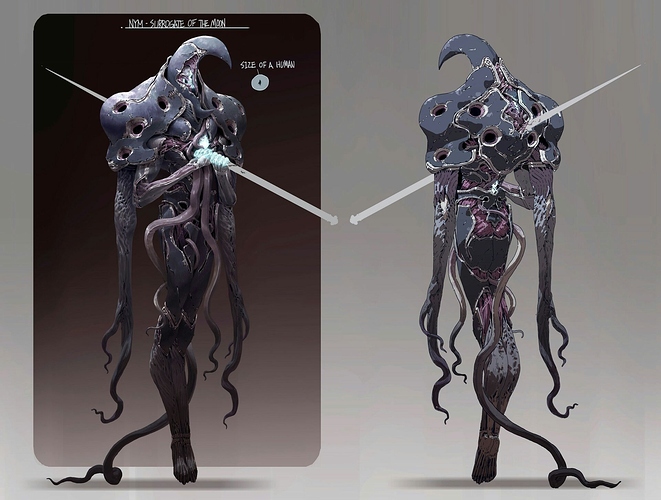 The image I did not create. I will link the artist.
https://www.artstation.com/artwork/XxPOD