Sorry for how terrible the image is, but not even a few minutes ago, my Brother was exploring the Black Armory section of the tower, and he found this little gem. A Mote bank. Let me know what you think.

20181206_211454.jpg4032×1960 2.81 MB
Since I don’t know how to upload via Xbox to Computer, I just took a picture with my phone.
I wonder if either…
Ada-1 (See what I did there?) Is researching The Drifter’s stuff.
Or B, this is just where the Drifter keeps his stuff, which strikes me as odd. Why? Because he has a perfectly normal ship that he could be storing it in, why risk storing it somewhere else were a wandering frame could happen upon it?
Possibly worse? C.
It’s Hawthorne doing her stealing. And she decided to claim a pocket realm.
Conspiracy theory, I know.
1 Like
sharknado December 13, 2018, 2:30am #2

Its definitely a mote bank.
A guy on YT named: CloudLXXXV was able to glitch into the area. He gets to the mote area starting at around 7:20
vid – https://www.youtube.com/watch?v=EkeY5wDsJ_k

My guess is that something will happen with that area when the “Joker’s Wild” Season is close to starting. Or that area will be used in that Season for something with the Drifter.

I do want to note that my assumption is probably wrong, ish, about Hawthorne.
Of course, we don’t know if she is secretly planning a rebellion or not, it seems that in the Lore Entry: Our Choices Define Us, that she really is stealing so other people can get supplies. Which is pretty darn noble.
So, I guess, keep the Hawthorne C idea on the backburner?
I dunno.
But it’s good to know we aren’t the only ones who’ve noticed this.

After reading this I looked at some of the gambit weapons. More so the new ornaments for them a bit closer. Is this just a stretch as I can’t find lore on the weapons, but could they have been crafted in a forge. See image of the trust handcannon. Could that mote bank be a prototype. Plus other forge emblems on the other weapons. 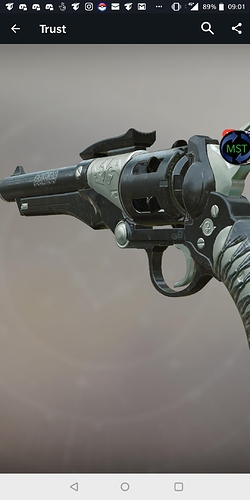 This could just be an ornament because it’s the season of the armory. And they made a BA themed one.