Mystery Runes in the Nessus Forge and Volundr Forge [EDITED]. (Definitely a Secret)

Hey guys. I need help with deciphering something in-game. As with the Annex area in the Tower some people have been able to glitch into some of the Forges pre Black Armory launch. This screenshot I took comes from the one on Nessus. As you can see there are some strange runes that when I first looked appeared to be Norse runes. The closest approximation I could find was Elder Futhark runes but there are some runes here that don’t match entirely with Elder Futhark and when I tried inserting runes from other Norse languages it just gave me gibberish.
Bhkanþbmn uleonxlu rŋ ntiŋhlael rŋŋyka jueas ŋht
That was my result. If anyone has any idea what this says or has a better way of translating please let me know. I know that with Bungie being Bungie that this is most likely some kind of secret that Bungie wants us to discover. If we can work together then we can solve this. 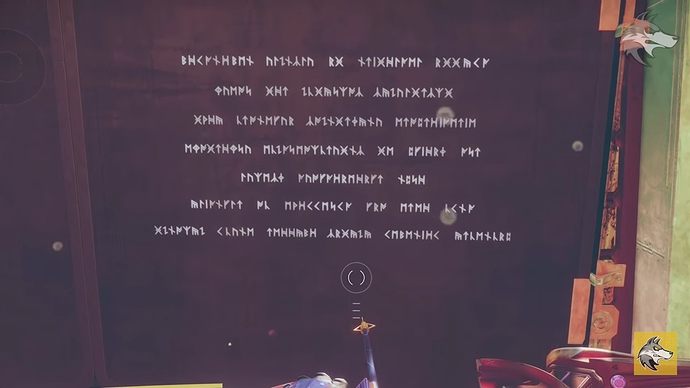 NOTE: EVERYTHING PAST THIS SENTENCE IS AN EDIT CONTAINING INFORMATION THAT HAS BEEN NEWLY BROUGHT TO LIGHT

EDIT 1:Now that some people actually have the machine gun there are some people finding hidden symbols in the Volundr Forge. if someone could help me get images of all the symbols please do. I don’t know when I’ll be able to get the gun and I don’t think I’ll have time anyway to look for EVERYTHING. Please Help me

EDIT 2:I just watched Unknown Player’s video talking about the forges and he talked about a maze-like pattern on the back of some blast shield looking thing. I showed this to a friend and he told me that it’s not a maze. The pattern is actually something called Celtic Knots. Along with these Celtic Knots some more symbols have been found including another paragraph of runes.

Russian? (Cosmodrome, with all the colony ships, and Failsafe being one?)

possibly, i don’t think it is though because it looks like runes instead of letters. I’ll try to look into it

I mean try translating certain things from the runes, and see if they correspond with Russian. They translate from Russian.
Though tbh, I was just tossing out ideas, I am not, in any case, someone adept at decoding and encoding.
But I do hope this does turn to something cool.

I’m still working on it, my friend says it might be Anglo-Saxon than just Elder Futhark. He came up with this
“Bhc/knhben Uanln R(?) Ntihlel R**c/k”
I wonder if this, once decoded, needs to be run through AtBash to be decoded? Ideas Ideas.
(A = Z, B = Y, C = X, etc. for AtBash)
Wow that’s actually pretty close to what you got though.

Maybe this is a code for like an emblem or something?
An idea, maybe it’ll lead to an ingame goodie if we put in the finished code into the Bungie app or website?

I just watched Unknown Players new video where he looked at some of the new symbols people have been seeing. One of the things he looked at was a maze like pattern on the back of a blast shield. A friend just told me that it’s not a maze. Its Celtic Knots. Thank you Chris Screenshot_20181205-153636_YouTube|690x388

Just a note for anyone reading/following this post, a brief summary as this has been solved…

It requires BA weapons to find a key for a substitution cypher, those runes are not translated as such and using the hammerhead on the original text shows some words highlighted so others are ignored. The Celtic knot map then gives the various cyphers for each word. There was also a reference to some words being anagrams. The final translation reads as:

After some historical research this was found to be a set of instructions for 1 of the symbol shooting puzzles that gets you an emblem (the hand 1).

Using hammerhead in the Volundur forge

yeah… i’ve been following this myself on r/raidsecrets on reddit and after seeing how much further along they were I pretty much gave up on doing it myself. I would like to say bravo Bungie for putting in the Ulfbert reference. The Ulfbert is a sword made only by the Vikings that was said to be a 100 years of it’s time because the Vikings figured out that by smelting the iron used to make the sword over the bones an enemy or dangerous animal the metal became more flexible and stronger. There have been multiple cheap copies of the Ulfbert made by other powers that didn’t use bones. the engraving on the real Ulfbert’s always had the cross (+) after the T

@SpartanLock, Yeah, I kinda gave up as well…
I wonder if there could be another secret sword, but it’s like Crownsplitter or something.

It’s either old Celtic or Norse runes. I’ll see if I can translate them later.

As a side note, Volundr means brave in battle

Uh… Not to be rude, but since this was all figured out, can we not resurrect an old topic? Yet again, not to be rude, just… Y’know…

Looks like a few of the symbols are the Ishtar Collective logo. Could be a language the scientists were studying? Connection to Venus because of Vex teleportation?

Where do you see the Ishtar Logo?