Is this boss from the link here Ghaul or another one? 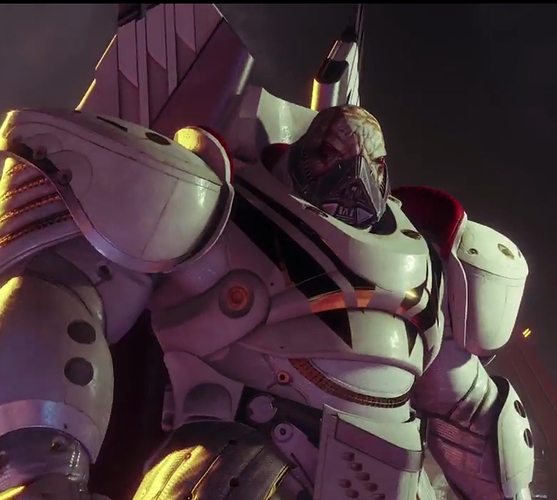 Indeed it is. I love his voice, but I wonder how he learnt English? And If there are other Cabal that know the guardian’s tongue?

That is Ghaul himself.

I wonder how he learnt English?

Oryx also spoke in English. Aliens who speak our language now include:

Is there anyone else I’m forgetting?

In the one Taken King cinematic there is what looks like a Knight/ Gatekeeper that talks to Oryx, saying that “the rest await extermination”

Well, we might not be speaking English anymore. Remember, the Ghost called Russian a “dead, old Earth language”. It’s possible we speak some derivative of a Basic or Common type language which we got from the Traveler, which explains why Oryx, Variks, and Ghaul would be familiar with it.

Yes, that would be Ecthar.

I still think Ghost has an inbuilt translator from the Traveller which is how it could communicate with other races (and why we hear them speaking English).

If Ghost had a universal translator, there has to be a reason why we couldn’t immediately understand Russian, the Chinese taikonautics labels on moon structures, the Speech of the Hive other than Oryx and Ecthar, the Eliksni other than Variks, and the Cabal other than Ghaul.

Our knowledge of language is limited in Destiny. We know only a little of the Cabal tongue because few have survived going there to recover stuff, yet they have had centuries to learn ours from what they’ve captured. Clovis Bray was the cornerstone of human understanding during the Golden Age.

Guys, I KNOW no one likes hearing this but: game mechanics.
Like how in Mass Effect all the aliens speak English.
(P.S Yes, I’m aware of the codex entry which mentions a translator chip but that’s obviously just a cover-up by the writers.)

We see the Consul talk to Ghaul in English, which doesn’t make sense seeing as you would think he would be speaking Cabal.