WARNING: If you do not want to know this information about Destiny 2’s second expansion, go read another post or play some more Destiny 2.

On December 27, 2017, the Japanese PlayStation store accidentally released the Destiny 2 expansion, called Gods of Mars. The title itself reveals that we will indeed be traveling back to Mars, and based off of the expansion’s picture below, we know it has something to do with Rasputin, the Warmind of Earth. We also know that Rasputin has connected to all of the Warminds and their networks from the original Destiny’s campaign mission, The Array. (Mission summary: We activate and reconnect a lost array that connects us to the other planets systems)

"Destiny 2 Expansion II: Gods of Mars sends your Guardian on a long journey to a brand new destination -the Frigid Vale of Mars, with an array of new missions, adventures and enemies to fight. Charlemagne has reawoken on Mars and has imprisoned Rasputin within an ancient vault. Work with the elusive Ana Bray -long thought to be dead, in order to combat Charlemagne’s Remnants, free Rasputin, and uncover the secrets of Clovis Bray."

Here is what the Japanese PlayStation Store had to say:
"Destiny 2 Expansion II: Gods of Mars sends your Guardian out to Mar’s Clovis Grove, a brand new destination that is host to an array of brand new missions and adventures. Work alongside the elusive Ana Bray in order to prevent Charlemagne, Matrix of Corruption from amassing an army of SIVA-enhanced weaponized frames before Mars is lost."

That’s a lot of info, and it seems like we’re going to have a lot to do in Destiny’s next expansion. So let’s take a look at the information in detail:

Frigid Vale of Mars: So there’s gonna be a new patrol zone, and we return to Mars. Hopefully this patrol area is going to be more like the Mars from the original Destiny, except for a lot larger amount of playable space. The expansion description doesn’t tell us much about this new patrol zone.
Charlemagne, Matrix of Corruption: Charlemagne is one of the lost Warminds, thought to be destroyed during the Collapse. So the fact that this Warmind is indeed ‘alive and kicking’ is quite a surprise.
Rasputin Imprisoned: This is where we have a lot of speculating to do. If Charlemagne is indeed a Warmind, why and how has it done so to a fellow Warmind. Maybe it’s angry that Rasputin took control of its systems.
Charlemagne’s Remnants: If it wasn’t for the Japanese PlayStation Store, we wouldn’t know what these are. Thanks to them, we know that Charlemagne’s ‘Remnants’ are infact a SIVA infected army of Frames. We know that SIVA is under Rasputin’s control, and with Rasputin under control, it seems Charlemagne took control of his SIVA as well…
Uncover the Secrets of Clovis Bray: This is the fun part: finally learning about the group that gave us Exotic and Legendary engrams. I wouldn’t mind to pick up a few Clovis Bray themed weapons, Bungie, thank you very much.

But the most interesting thing to me about this expansion is the fact that everything we’re learning here was already given to us in the Destiny 2 base game and some parts going back to the original Destiny, we just couldn’t piece it together (if you did, you are either God or a Bungie employee).

Here is ‘Grimoire’ proof from Destiny 2:

Tower Hanger #1 Daito Room:
“Looks like a journal: Ana Bray. But I can’t tell who— Pretty much the entire thing is redacted. And there are whole pages missing. Something about all this seems… wrong. Am I worrying too much?”

From a lore perspective, this seems that everything was given to us from the beginning, right? But with this additional link in the chain, we have more proof for all these claims. The frames (non-Exo robots) are being modified by something, or maybe even by each other. Once taking control of Rasputin, Charlemagne has control of his army of frames that laid waste to the Iron Lords. But, this is similar to Joseph Staten’s original story for Destiny.

According to Staten, Rasputin took control of an Exo, and made frames under the control of that Exo under his control. Similarly, one corrupt frame could corrupt others, one by one. This seems to be Bungie’s most prominent expansion yet, and I hope it isn’t like Curse of Osiris…

Shoutout to my friend CapSkip for helping me organize all this info! (He isn’t a member of the Ishtar Collective)

This leak is highly likely to be fake, although some details, such as the dlc being located on Mars, are probably true. People have pointed out that there are problems with the Japanese text and that it looks like something that has come from Google Translate. For example, there was this comment from Reddit user ZOZOT3:

Another reddit user, megamanexe4, has also pointed out some other issues with this supposed leak:

If you look at the original picture of the leak on the North American Playstation store (see below), you can see that there are issues with it too. 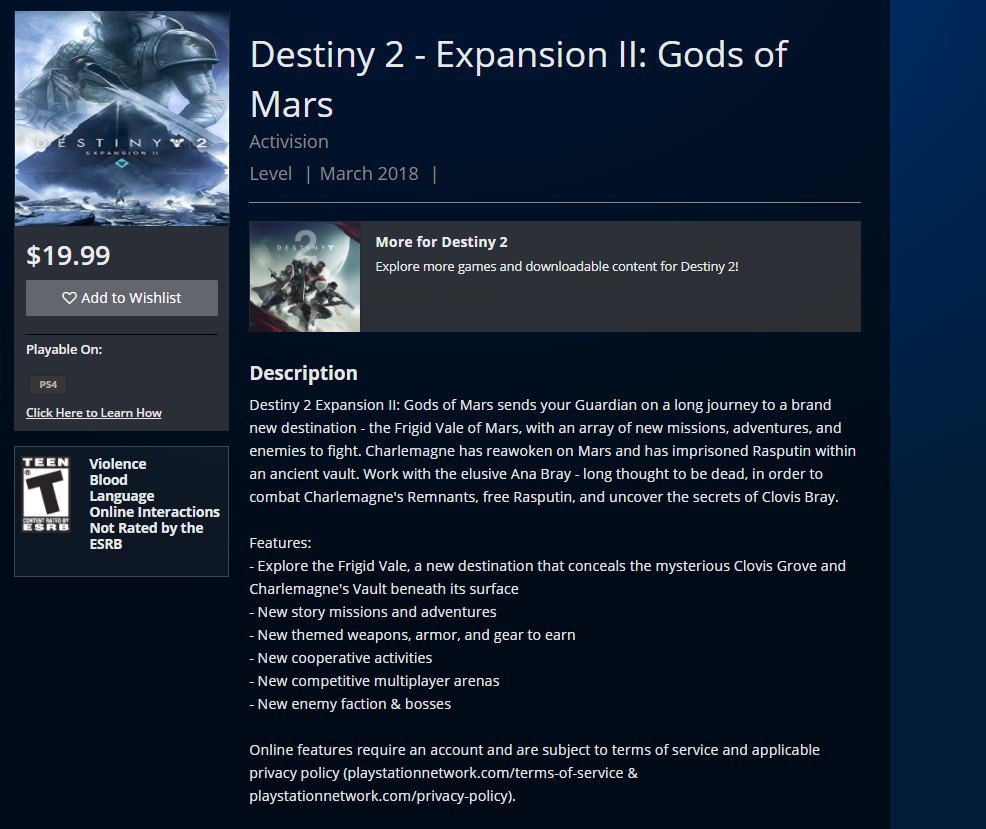 The picture in the top left corner has obviously been squashed to fit in the square. It also only says “Expansion II” on it, not “Gods of Mars”, unlike the Curse of Osiris promotional pic which includes the title of the dlc.

Moreover, the original Reddit post where this leak was first posted has been removed by the mods as it was confirmed to be a fake.

‘Gods of Mars’ could still be the title though. It’s highly likely the next dlc will be on Mars. Luke Smith strongly hinted in an interview that the cutscene at the end of D2 shows where we will be going in future months and years. Mars was the second place shown to be touched by the Traveler’s Light, after Mercury, which was the location for Curse of Osiris. The alternative ending for the Arecibo adventure, which mentions “red sands”, “Mars” and “ice caps”, could also be another hint as to where the next dlc will be set.