The Traitor's Die, on the front of Bad Juju?

So while researching my L.ORG project i came across this odd artifact, the Traitor’s Die:

Every roll of this die is already written into the fabric of Oryx's reality.

It’s an interesting artifact in itself, but it became even more interesting when I realised that I’ve seen that shape before: 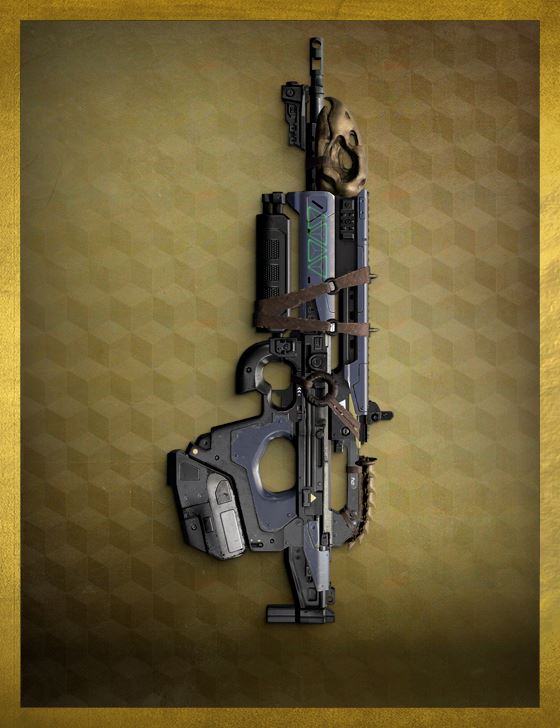 "If you believe your weapon wants to murder all existence, then so it will." Toland the Shattered There must be a structured, mechanical explanation for this weapon's hunger for combat. There must be. But none has been found.

That head is actually extremely similar to the head on Bad Juju. Disregarding all the normal comments about reused assets, any thoughts on what this connection could be?

Why I think it’s a meaningful one is that the Die relates to Oryx, and Toland, who created Bad Juju, is very obsessed with the Hive and Oryx. It doesn’t feel like a coincidence to me, instead that it has some hidden meaning.

You can make out the ornament on the gun better in some other screenshots. Here’s one I found on VG247: 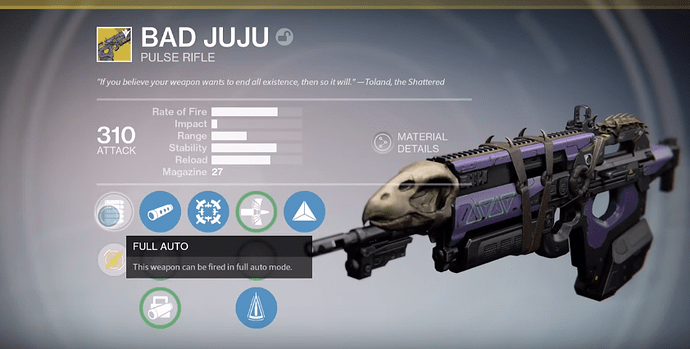 I had never noticed this connection before and it’s really surprising! The shape of the skull (if it is actually a skull) doesn’t really resemble anything from the game as far as I can tell.

oh that looks interesting! but it doesn’t look like hive to me, more of a bird? could that be a skull of one of those sun ravens they’ve exterminated?

i worked on this video with Myelin, i didn’t know about the Traitors Die when we were talking about it but we do cover the concepts behind the vulture skull

its a great video!

An interesting thing that you point out is that skull is only replaced by an ahamkara skull in one of the ornaments. So perhaps both skulls are connected to the ahamkara?

i dont agree with that, just that a common theme for when it comes to witchcraft is bones are powerful.

i read a series, The Last Apprentice, which had witches. Conventionally (they’re based on region) you’d have 3 types, Blood, Bone, and Familiar. I think it’s pretty self explanatory what each used to create spells.

So it’s not so much that the Traitors Die/Vulture skull and the Ahamkara are related, but that they both hold a power of some sort.