Thorn in Curse of Osiris

There’s Been a lot of talk about the weapons appearing in The Curse of Osiris dlc but one weapon I think went overlooked was what looked to me like the Thorn. At one point in the trailer it show’s a hunter jumping past what looks to me like a sun while holding a hand cannon that looks very similar to Thorn(See image below) 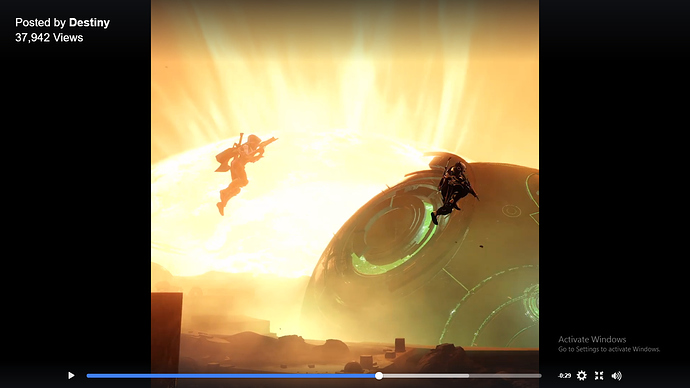 (Apologies if my potato of a laptop captured an image of bad quality)
Just looking at the frame of the cannon and seeing how the barrel has a jagged curve at the end of it reminds me a lot of Thorn but the rear of the weapon looks a lot like the rear of thorn with regards to shape and the hammer. The cylinder of the weapon seems somewhat illuminated in comparison to the rest of the weapon which is similar to how the Thorn had a cylinder which was similar in color to brass. Another thing which I think supports the idea of this being Thorn is that a small amount of light seems to be shining through the front of the barrel where the Thorn had a green bauble in place, I would think that what with the light coming at the bauble from the background it would shine right on through.

If this is the Thorn then I can’t help but wonder why it’s in the Osiris dlc and the only connection I could think of was extremely loose at best. The Thorn was wielded by Dredgen Yor who is known to have used the weapon to kill Pahanin as we are told by the Cloak of Dredgen Yor which says

“Before he took Pahanins Light, Dredgen Yor ruled the Crucible, The notorious Thorn at his side.”

This being a starting point for the all be it weak connection we then take into account that Pahanin was the one who introduced Wei Ning to Erianna-3, This is shown to us in the lore tab of Eriana’s Vengence in the when it is said that

“Our first meeting, in the Tower saloon. Your laugh made the glasses clatter. You bought three rounds for the entire room. Pahanin introduced us.”

It is known to us that Eriana-3 was a member of significance in The First Fireteam seeing as she organized it, One of the members of said Fireteam was Toland who near the end of the Ghost Fragment: The Hellmouth says

“But I have work to do. I shout into deep places. Osiris! I call. Osiris, Osiris! Can you hear me?”

which is the what I could find off the top of my head with regards to a connection between Thorn and Osiris.

Would love to hear thoughts and ideas on the topic

Thorn has a prominent protrusion near the trigger, as can be seen here. The gun in the trailer looks far less jagged, save for the bottom lip. If anything, the gun is similar to Sunshot, namely in how flat the bottom of the barrel is. In motion, the top of the gun doesn’t look to be completely flat, which would also match Sunshot’s design.

When trying to connect Thorn to the DLC, it’s probably easier to simply say that Yor killed Pahanin, who was part of the first fireteam to enter the Vault of Glass. The direct connection to Osiris seems pretty tenuous, namely since it relies on a fourth-hand connection and assuming Toland is both right and in the Overworld for the sole purpose of talking to Osiris.

I see what you mean with the absence of the protrusion among other things but seeing as quite a few key features are missing when comparing this weapon to Thorn, Id say it’s still a possibility that this is one of the Thorns that the Shadows of Yor created which they said was “Tamed” making it less jagged? It would be a nice way of Bungie giving us more insight on the initial shape of Thorn when it was changing from Rose but that’s assuming that the Shadows used the same weapon frame when creating their Thorns.

Presumably, every Thorn looks the same as the first. The copies are instantly recognizable as Thorn, which implies that there’s no real change to the silhouette of the gun:

There’s no telling if our Thorn looks the same as Yor’s did, only that he had his Rose and that we used “a worn hand cannon and pages of cryptic writings pertaining to one of the Weapons of Sorrow” to create the one we see in-game. In a meta sense, though, changing the silhouette of the gun doesn’t really match up with the other guns that have been brought from Destiny to Destiny 2. Besides, it’s unknown how successful the Shadows were in their mission or how they tried to recreate Thorn.

All the other weapons I see that are making a comeback:

They’re all TTK releases right? If so putting thorn alongside them wouldn’t make much sense. I’ll admit the protruding lip had me there for a moment. However. To make a counterpoint, the new “No Time to Explain” is re-skinned. It wouldn’t make sense for Thorn to be included with TTK weapons but it would give a possible reason as to why it looks different than its predecessor.

As much as I love (Jk, I hate that damn gun in PvP), that’s not Thorn. It lacks the jaggedness but Thorn is expected to come back. I would like to see the hand cannon Rose, Rezyl Azzir’s personal hand cannon. I personally think Rose turned into Thorn as to show the symbolism.