Where did the idea that Oryx is coming back originate?

I lurk the Bungie forums and a prevalent idea is that Oryx can somehow be resurrected. Did I miss the lore for that or is this just spinfoil?

Assuming he could, why would Nokris revive the Father that exiled him and removed him from the Worlds Grave records?

@Melkor_Darkstar This comes from a large scale puzzle (Similar to the Corridors of Time) that came from the cryptoglyph in the Shadowkeep collectors edition. It ended up as a text from the Hive talking about the effort to revive Oryx. (From what I remember) That is where this whole “Oryx is coming back” craze came from. Hope this helps

Here is the text: 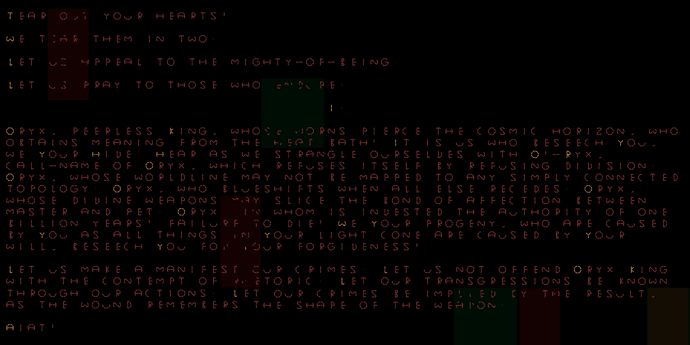 Ah, so I did miss some lore. I never bought the Collectors edition (too poor) but this does illuminate the events. Do we have a transcript on the Collective somewhere?

edit: we do. I have read them before. I must have forgotten.

Yep. The Hive do not like necromancers, because that is why Nokris was cast out by Oryx, and why he was taught by Xol.

But…is there anything that says that Savuthun and Xivu are against it?

I would assume they would be, Xivu more than Savathun because they likely feel that being revived by unnatural means is a show of weakness, because if you were not strong enough to live in the first place, why should you get to live again? Oryx might be an exception to this though considering how much he did.

That may be for Xivu. With what little we know about her, she seems to much like the honorable warrior type. But Savathun, though she may be against it when involving herself, she’s shown time and time again that she is not one for considering others feelings…among other things.

Besides, if Savathun were to revive someone as powerful as Oryx, it would put her on the pedestal as the most powerful of the three siblings. It would be a power play, a display of dominance, a show that all other hive can’t ignore.

Now for a little fun thought provoker. How would Oryx feel? Most likely humiliated, ashamed that he has been publicly displayed as what he sees as weak. What would he do? Accept his fate as a subordinate to the superior sibling? Fight to reclaim his dominance? Or something else? His Hive might still follow him.

TL;DR: All Savathun cares about are the actions and results that put her ahead, and it wouldn’t be very surprising if she were to resurrect Oryx to do just that.

But of course, if one of (if not the only one of) her morals is to not perform necromancy, then all of this falls apart. But what of the Hidden Swarm? The Hive on the Moon who, through some acts of …“light treason”…have cast aside some of their old logic. They’ve been left there for, what, several years? They’ve been forgotten, helpless, leaderless, hopeless. I wouldn’t blame them if they had gone crazy. Actually, I think some of them did, I don’t remember. What’s important is, they’ve had enough, they no longer want to sit idly as weaklings, they will do what they must to attain power.

But, I still believe they will not perform any acts that may be seen as heretical…

…or at least, not without a little push.

Well, the Daughters of Crota already have performed “Heretical” acts, among them the Resurrection of Zulmak. However, I think we are missing the bigger question: Is it even possible to resurrect the Taken King? So far, the only ones who meet the criteria for that kind of act are the Guardians who killed him. Even then, we killed him in his Throne World, resulting in a True Death, Final Death, what have you. Neither Xivu nor Savathun were killed in their Throne worlds when Oryx dispatched them and summarily resurrected them with their aspects.