I have been working on a Destiny Timeline book for the past few months. I have just gotten to the Dark Below expansion.
I started from the Books of Sorrow, so this is good progress for me. I put a link for it in here for people to look at.
It’s been a slow work by myself and I wanted to see what other people thought of it.

May I suggest Destinypedia’s timeline for reference? It dates things a little differently but is more or less accurate as far as actually dating things go.

I’ve been using Ghost Stories timeline website for a timeline. But I have been using Destinypedia for the missions and spellings of people. I want this to feel more like a book, so its something people can learn from. And I don’t know if anyone has updated the dates based on the schedule in the Skyline crucible map.

Scehdule in Skyline? I wasn’t aware of that. What is it exactly and is there a video or picture I can’t look at since I cannot play Destiny currently. 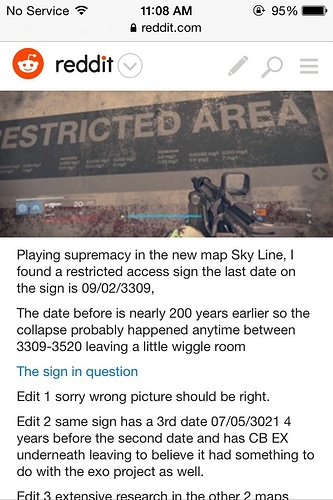 That’s really cool, I had never noticed that in Skyline

the issue with those dates are that they dont have any structure to them, they arent X years then similar Y years there’s massive jumps between them.

and while it’s not in-game there has been mentions by Bungie that reinforces it, IGN mentioned either pre-release or extremely early on that we wake up in 2700. this makes sense because we have the actual world advancements, or rather lackthereof to look at.

simply in the Cosmodrome we see remnants of a highway in the Divide as well as a pretty standard tank. Now yea we have spaceships that can do some form of “warp-jump” but we also have pretty basic looking ships as well seen in the Steppes.

now i focus fully on the cosmodrome because it was here during the Cosmodrome ride-a-long that they mention that technology boomed so quickly that there became a bit of a divide. some people clung to the “retro” old style cars, older designs. To assume that we actually found the Traveler in the here and now, a few centuries of MASSIVE technological booms would cause exactly that. we sorta saw it with computers where people refused to adapt. “i will never own a cell phone, there’s nothing that can be said better over a device that cant be said face to face” became “i will never send a text, there’s nothing you can text better than by voice”

personally i completely disregard those dates as anything of value. that is until i see something more substantial backing exactly WHAT it could mean. because there’s also that, those dates are ENTIRELY out of context.

I wonder how that meshes in with the the “28th century” timeline Bungie has Destiny placed in. Apart from that, I read through your timeline, and while there are many parts of it I find disagreeable (because I rely on Destinypedia) the whole section concerning the Hive doesn’t take place thirty-four thousand years ago BCE, it takes place 4.54 billion years ago, predating the formation of Earth, and that’s late in the Books of Sorrow on top of that.

@VulshokBersrker okay if I post this in my clan Destiny lore channel in discord? we have a good crew trying to get more familiar with lore?

Oh course. That’s one of the reasons I had this.

Well Destiny has the setting where the Traveler meets us in the present day. So for those dates to be on the map shows that Clovis had plans and he never made plans so far into the future. He focused on current projects.

I just used the years in the Books. I haven’t looked from other sources other than the Books. Where can I find the billion years source other Than destinypedia?

If the statues on the Dreadnaught were created before Earth was formed, then the story in the Books of Sorrow must have taken place at least 4.5 billion years ago.

Awesome, ill change the timeline to reflect this.

Not the fact that the Traveler meets us in the 21st century. That’s in the first cutscene. And since there are dates in the 3400 area shows that when they said centuries it was more than one or two. It was over a Millenia.

you said Clovis focuses on the present, that’s absolute conjecture.

and no nothing is concrete that says we encounter the Traveler in the 21st.

and those dates, as i’ve said arent concrete enough evidence to say what they mean, there’s no context to them whatsoever

First, we do know the Traveler shows up in the 21st century.
Second, those dates are still evidence that the Golden Age lasted long than before.
This video has the opening cutscene. It says Present Day, as in today. The 21st century.

so then what does “present day” mean exactly? september 9th 2014? it’s a broad term, this is essentially telling me that “present day” can send 3 people safely to Mars right now, and have guns that will work on Mars as well. I’m pretty sure they wouldn’t currently but i dont know.

“Centuries after our Golden Age began the Darkness found us”

The present day is in the 21 century. They are playing it as the day the game released was the day the Traveler showed up. And ghose dates in Skyline just show that the Golden Age lasted longer. The Ghost Stories timeline has the Collapse at around three centuries long. This is newer information so we can learn more from it. Even if these dates are stretched, it still shows a time farther than 2400.