Any grimoire cards/stories that could be turned into machinima?

So I’ve been doing a bit of reading up on the grimoire, and I’ve noticed several cards/stories that would make good machinima films, including Eris’s fireteam’s attempt to retake the moon and Dredgen Yor.

Machinima is when you make a film by filming a video game. Destiny has a lot of story potential, but you have no theatre mode and must work with a rudimentary FPS camera. You also have limited resources, and getting the right gear (i.e Thorn for somebody playing Dredgen Yor) can be tricky

I’ve scrapped Iron Lords, Reef Wars and Kabr’s failed VoG attempt, as they’re too difficult to film, for different reasons. VoG was too hard to actually film, due to VoG being difficult to get through. Iron Lords requires too many people, and lots of grinding. Reef Wars is unfilmable, as we only have 3 Reef locations in-game and one of them is a social space. Besides, Battle of the Twilight Gap is also too dofficult to film.

I can’t spin something out of nothing, I need to have some information on the subject before I film it.

I have already been working for over a year on the film focusing on Eris’s fireteam’s attempt to retake the moon. It’s going to be called “Crota’s Bane” and is currently 1 hour 17 minutes long. Most of it is completed, I just need to add a few extra scenes.

As an additional idea, I was thinking of making films I scrapped for being too difficult in Blender. This would require lots of work and effort, but it’s more plausible than doing it in-game.

Any suggestions, offers of help (particularly people interested in acting and modelling) feedback or comments will be welcomed!

I’m interested to hear about your Crota Fireteam project! They’ve always been a lore favorite of mine (second only to Dwindler’s Ridge). Have you used the grimoire audio logs in the script?

Like you, my personal favourite has always been the Dredgen Yor/Shin Malphur story. It’s a nice simple story on the surface, but once you delve deeper, it raises interesting points about morality, the Darkness, and corruption. Malphur is the good guy, yet he (spoiler alert) kills Yor in the grimoire card out of vengence and the need for an end to Yor’s reign of terror. Yor is corrupted, whether by Thorn, his experiences on the Moon or his own shortcomings. I’d just like to point out here that Rezyl Azzir is more or less confirmed as Dregen Yor. Azzir uses the hand cannon Rose, the title by which Thorn was formerly known as. Azzir certainly fits the “hero” described in Ghost Fragments: Thorn.

I’m currently writing the script for the Dredgen Yor/Shin Malphur film, which I’m thinking of calling Corruption. In the meantime, here’s a picture of Toland the Shattered from Crota’s Bane. 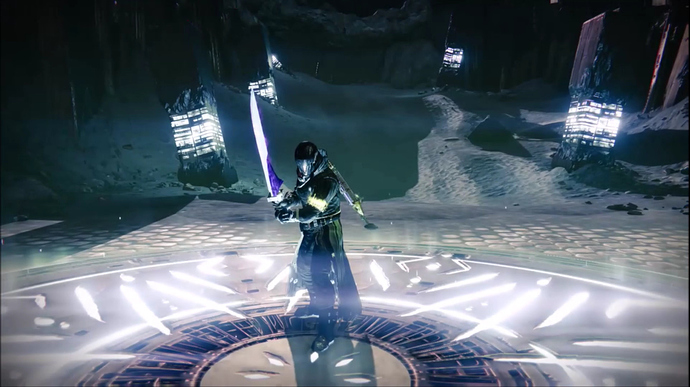 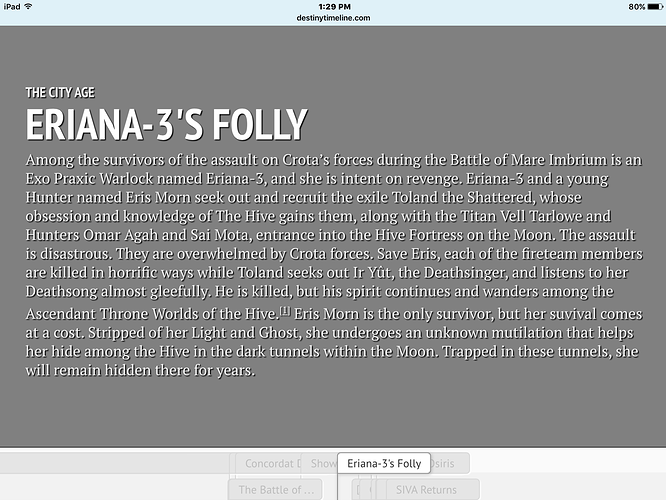 Check this link as well: 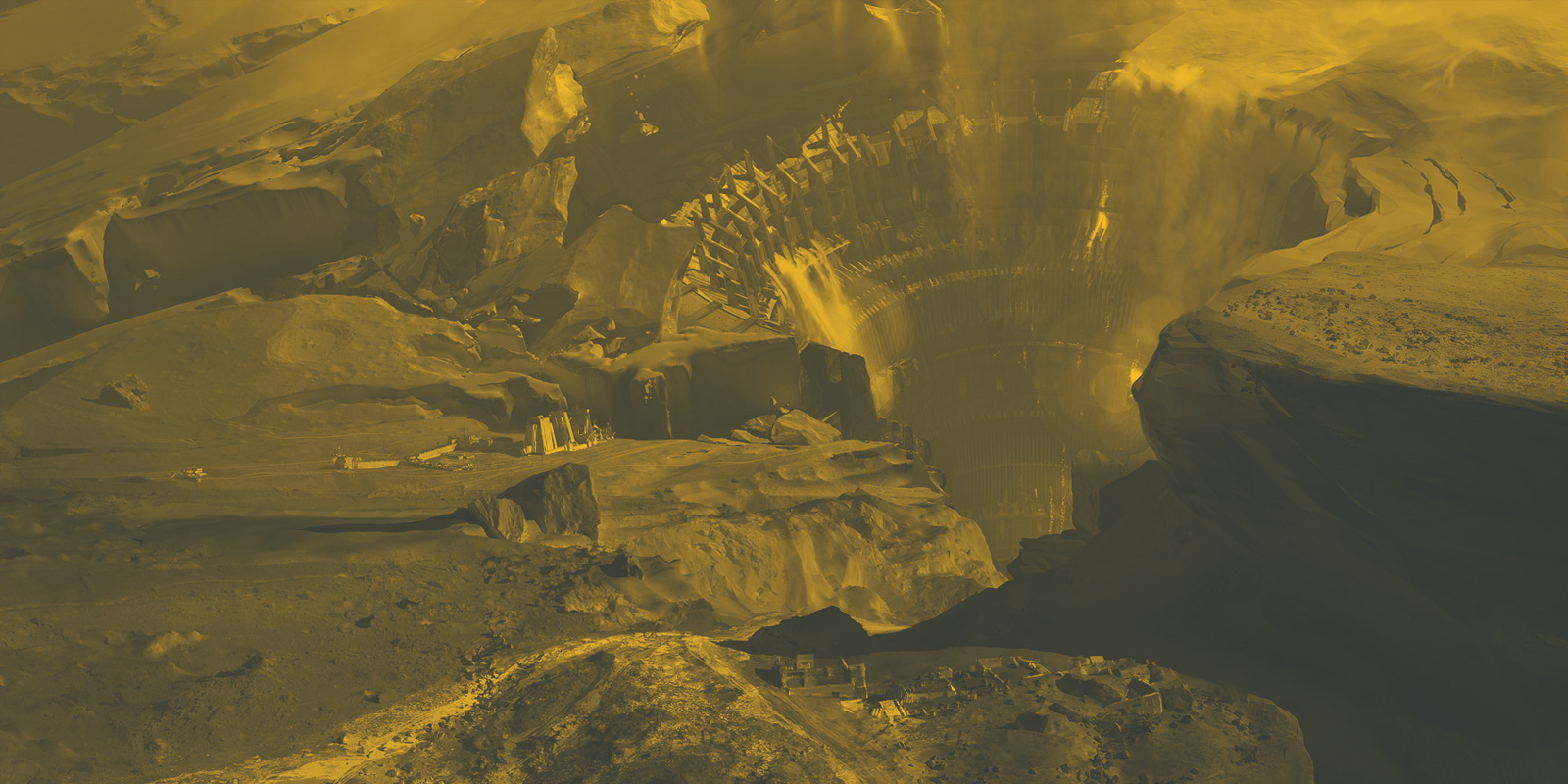 At Mare Imbrium a host of thousands of Guardians came united to retake the Moon, and were mercilessly slaughtered by the seemingly invincible Crota and his army of Knights.

Nicely done. What made you choose to show Toland with Void Edge?

Oh duh cause of the third person, don’t mind me

Thanks for the help. I’ve looked at the grimoire cards in detail, but haven’t checked out anything from destinytimeline.com. I’ll look into it.

There are several reasons, other than third person:

That’s logical, and I guessed the third person thing after the fact. I wondered why Void Edge specifically, but I guess the color scheme makes sense and it’s less disruptive to canon than the more distinctive Exotic swords.

I think you’re right that Toland would definitely be into Hive swords, especially with him saying to Omar, “When you’ve got your hand around the hilt and their ash under your boot, you might change your tune, Hunter.” It’s a pretty ominous thing to say, well within reason to think he may have used a Hive sword before.

Do you have your vid posted on anything? I would love to see it.

Not yet, but it’ll be up on Youtube when it’s done. I may or may not release a trailer before the film itself is released, I’ll see how it goes.

So, what projects are you looking for voice and modeling talent for?

Modelling: We’re just looking for somebody to stand in the scene, take part in fights, etc. We have dummy accounts that contain the gear needed for the characters. I’ve set up a dummy account for Shin Malphur, so we just need somebody to actually use the account and control the character. No grinding required!

Oh, and we film on the Xbox One.

I’d be willing to lend my voice. I’ll message you with my details if you like.

Yeah, that would be good. Go ahead.

I think that the story of the Iron Lords could be good for a movie thing (I’m new to this whole movie thing) I think it would be good because it tells you a story of honer and legacys unbound by the Darkness and SIVA.

My name is Byf is already on top of that and it is quite awesome actually.

I think you could make the Faction Wars for machinima. You could use the Bannerfall map to film the fighting.
You could also do the story of the Six Coyotes. (First guardians to go beyond the wall.)

I’ll help where I can. I’m female and can also rope husband & daughter in for voices if need be. Is there anything specific you need on characters?

I’m a guy and I have been told I have a fairly deep voice so I’d be willing to lend a hand.

All I need is a voice actor for Eris. I can PM you the script and you can take a look at it.