I have been making some drawings lately of Ember-3’s concepts and want to do more to help improve my art skills. It’s not going to be anything extremely well made or impressive but I try my best and work to make it the best I can. I will do in full color as long as ample description is provided and if you want me to. Just wanting something to do as well, school life is quite boring and something to draw would be pretty nice. In any case, let me know if you have a request by replying or messaging me, I will post a “pre-color” version before I color (if you so choose). It will be posted to your reply or the message. With that I will shut up.

Yeah, or otherwise, not picky just bored. But Destiny is more so what this site is for…

Is it possible to draw a Hunter, wearing armor styled after something like this https://steamcommunity.com/sharedfiles/filedetails/?l=norwegian&id=511048063 Without the dome-like helmet, more of gas mask look to the front and a hood? (It would be amazing if you could have a bone-handled knife strapped to his chest, and a sniper rifle on his back) As a final request could you possibly have him holding a hand cannon that looks a bit like this It was a very large and deadly looking revolver. Its body was black with silver inlays and a devilish skull carved into its wooden grip. Simple notches were chiseled along the length of the barrel. Might be too much but honestly, I’d just like to see this visualized.

If it’s not too much to ask then could you give me a description of the armor? The link won’t work on the device I am using.

can i see your interpretation of my Fang?

Would you be able to draw my guardian? 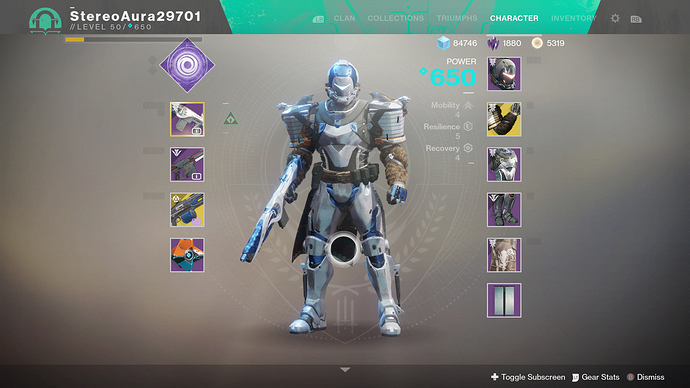 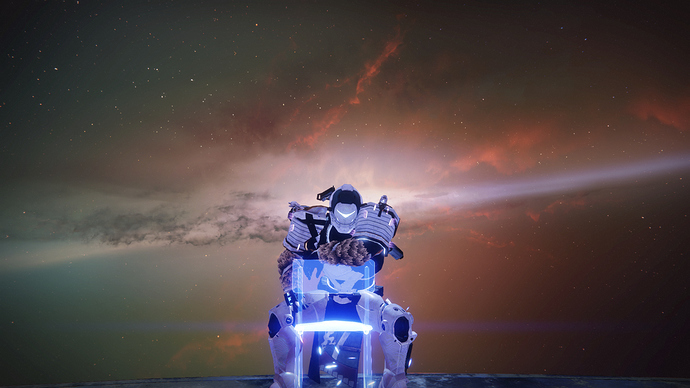 FUCK mate, those were the good days, just me, Boon, and my revolver. That one follower saved my ass too many times to count. once im done with my current F4 play through im going back to NV

I’ll put this on hold for a sec but once I get the reference image I will get on that, which means Athe is next.

New Vegas will always be my favorite. Really wish we could get a remaster, but the engine NV was built on is not very…modern.

That’s no problem, is it possible to tell me what link may work, because honestly I can’t describe this particular armor. (Does these ones work? https://www.redbubble.com/people/digiartyst/works/31466252-fallout-ncr-ranger-fan-art-poster?p=metal-print 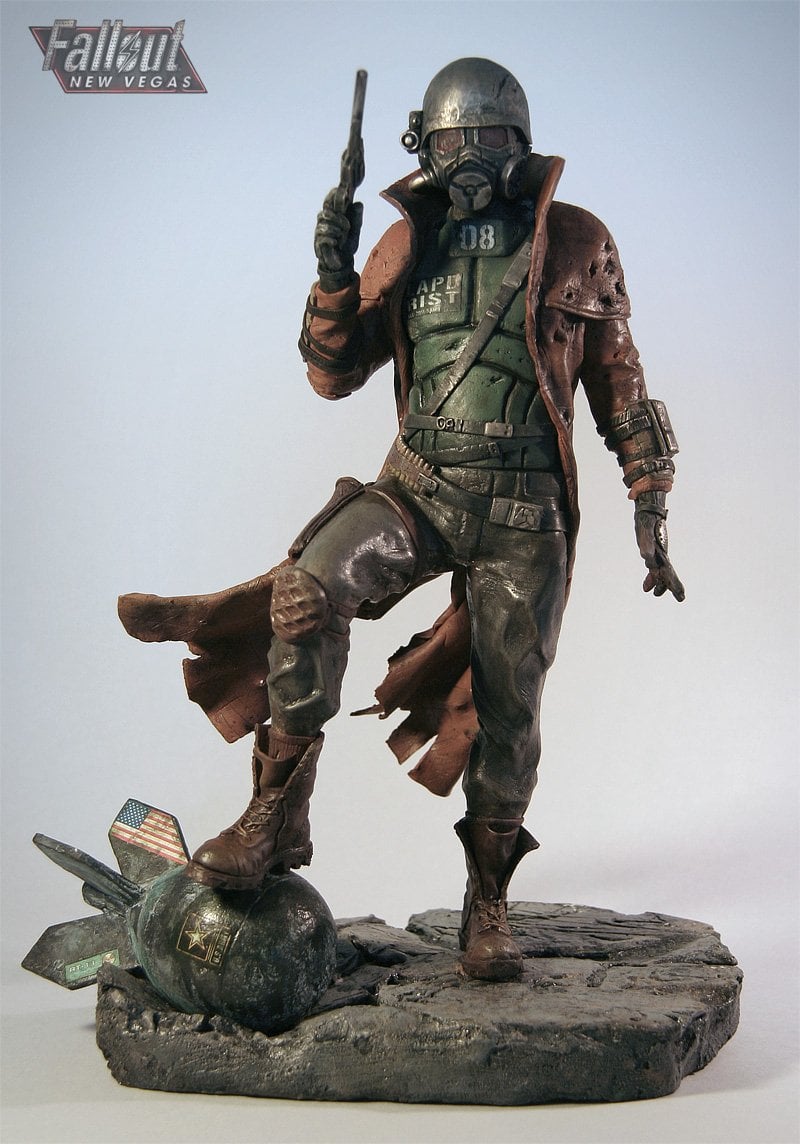 I have a couple things I would like to see drawn. There is a specific scene from one of my first where a character draws a picture. I’m not in a spot to get any reference pics right now though.

Yep, alright, I believe you were first so I’ll get right onto that.

Alright, but if you could describe the scene(s) to me then I can get a more accurate picture.

Her face grew redder, which I honestly hadn’t thought possible. There was a guilty look in her eyes I hadn’t seen there in years. She stepped over and stooped down to scoop the pad up off the floor. Her eyes flicked from it to me a few times. She looked away from me and turned the paper so that I could see the picture.

It was a very impressive drawing of her punching me in the face.

“I… well… that certainly is something,” I managed.

“I didn’t think you would wake up,” she mumbled.

“I was mad at you for nearly getting yourself killed,” she continued, “and was thinking about what I would do if you ever tried something like that again. I started it before I knew how bad things were and continued because, well, you know how I feel about not finishing what I start. Don’t be mad.”

“Thanks,” she replied with a slight smile.

“Next time, though, could you at least leave out the tears?” I suggested.

“Nope,” Celeste retorted, “that’s what brings the whole piece together.”

What I would be interested in is Celeste’s drawing, her punching Claney’s in the face. Something somewhat exaggerated, him flying back with big tears. She’s a Hunter, he’s a Titan. I’ll need to get pictures for their appearance.

Alright, I’ll make a base sketch and send that over once I finish the others’ stuff. Aethe’s should be somewhat quick, but people are hard to make. So it could be awhile. Sorry for the hold up all! Was on spring break!

Alright, here is the base version, without the clean up process, inking, or coloring (yet) Hope you like it! Now would be the time to request additions or edits! 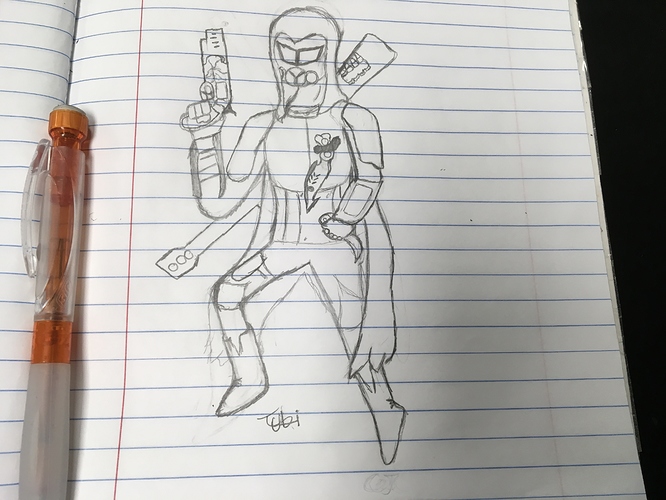 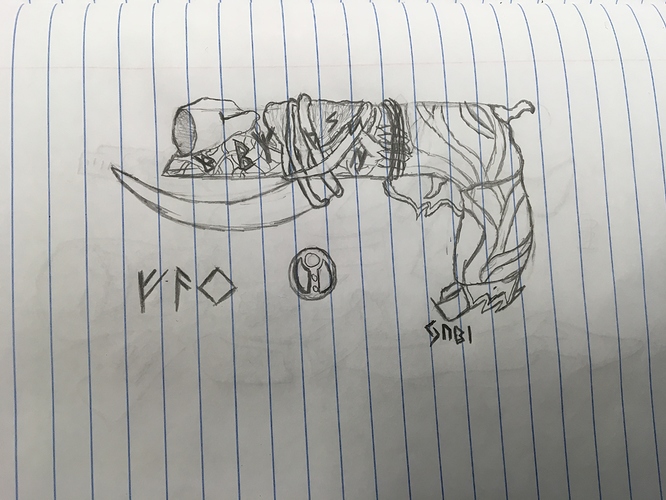 Actually, @SpartanLock is there any specific position you want him(?) to be in? Otherwise I will probably just put him in a comedic(ish?) position.