Ghaul, Consul, and the Empire

With the Beta of Destiny 2 getting relitively closer, I thought it would be good to review over what we know about the Cabal. Anyway, here it is.

Part One: Power
Let’s start from the beginning, when we first meet the Cabal in Exclusion Zone, our ghost tells us this-

Here’s what I have on the Cabal: 800 pounds and highly militarized. They blow up planets and moons just for getting in their way. Just so you know what we’re dealing with.

The second sentence tells us a lot of information about the Cabal’s power. They blow up planets and moons for ‘getting in the way’. If they could do that, why not simply obliterate the planets of Sol, or use it in the war for Mars? Well, they have a backup plan for Mars. Their Psions have done something to bring the asteroid Phobos closer to the surface of Mars.

If this doesn’t seem dangerous, think again. With an asteroid the size of Phobos, if ever the Cabal launched Phobos into Mars, the result would wipe out everything on the planet, Guardians, Cabal, and Vex alike.

Another example of the Cabal’s power is seen from the Destiny 2 Gameplay Reveal, where the Cabal make a machine to blow up Sol. We see their machine shooting a blue beam, linking a cracking planetoid and Sol. We know the weapon is of Cabal origin, becuase of the logos and their ammunition crates thrown across the floor, like we saw in The Coming War.

Part Two: Possible Hierarchy
Most of the information here is speculation.

Let us get started with the Cabal Empire hierarchy. There are many parts of Cabal Command, and the armed forces list is below (from Destinypedia):

Now with this in mind, let us try to create a structure (my apologies if there is one and I haven’t found it

(If the emperor has a mentor, he would be at the top, like Consul is to Ghaul)
Emperor
Primus
Valus
(Are Valus and Val the same thing? Probably not…)
Bracus
Commander

The (maybe) main antagonist of Destiny 2, Dominus Ghaul is an interesting character. He was barely mentioned from the Gameplay Reveal, which adds to the mystery. He was mentioned twice, though, once by Luke Smith. He said that:
Ghaul has been raised since he was little, to believe that he and the Red Legion should have been chosen to receive the Traveler’s light. Ghaul wants to show the Traveler the error of his ways.

The Game’s Lead Director (LOL I forgot his name…) also mentions that:
Ghaul feels that it is owed to him after what he has been through.

This statement raises two questions. What has Ghaul been through? And why did he feel that the Traveler made a mistake?

The common (along with mine) belief: that the Cabal have fought against the Darkness. This doesn’t make sense, in a way. Why would the Darkness fight against the Darkness? I had the same doubt in a different post here, and got a lot of answers. [quote=“RedRenegade, post:2, topic:496”]
I think there’s a lot of confusion over the Darkness, what it is, and its relation to the different enemy races in Destiny. There’s excellent videos out there on that subject, too, like this one: https://youtu.be/vRw39cB1iH4

But as far as the different races go, this is a subject I’ve been sitting on for a while, so I’d like to try and explain my thoughts on it. Excuse the long post

The Darkness is most closely related to the Worm Gods and the Hive, where it is known as the Deep. The Hive are, so far, the only enemy race that we observe using the Deep’s power in a way that resembles how Guardians use Light, in the form of Hive magic; with the exception of the Vex in the Black Garden.

The Eliksni and the Cabal are both military forces that do not deal with paracausal powers or abilities comparable to the Light.

The Eliksni once had a relationship with the Traveler, but the Darkness/Deep caught up with it and caused the Whirlwind, whereupon the Traveler left them and they turned to space piracy.

We know little of the Cabal, but it’s suggested that their homeworld was destroyed, and they don’t use the Darkness’s energies in combat either.

Most of the idea of every single enemy type in Destiny being “the Darkness” comes from the Speaker saying as much about the enemies of the City. It is my opinion that he is either wrong, lying, or supposing that the Eliksni and Cabal are serving the Darkness indirectly. (From a meta perspective, this and other in-game dialogue that is questionable when considering the lore could be a result of the oversight from Activision and the replacement of Bungie’s writing team.)

The Vex have a more complicated place in the matter, but the Hive are the only race consistently and fully immersed in the Darkness or the Deep, and even they - the closest thing to the approximation of some kind of “anti-Guardians” - are not the Darkness itself. The Worm Gods, who gave the Deep’s power to Oryx, are likewise, not the Deep itself. The Deep is something else entirely, which Oryx communed with in the part of the netherworld only he could walk with the Tablets of Ruin. Id est, the Deep is its own entity.

The Cabal are, at best, indirectly advancing the Darkness’s end goal of the destruction of the Light. However, Ghaul wants to possess the Traveler, not destroy it. If he were in any kind of employment or agreement with the Darkness, his goal would likely be to completely wipe it out. There’s also the possibility that the Cabal’s homeworld was destroyed by the Darkness - which might be what Byf is referring to.

In any case, the Cabal are not allied with the Darkness…and neither are the Eliksni or those Vex that have fought with the Hive. These races each have their own stories and their own goals, not all of which are compatible with the goals of the Deep or its philosophy
[/quote]

The Darkness has…different groups, the same way Guardians have different subclasses. The Hive might have fought against the Cabal in a war for one of the systems the Cabal had captured. Also, as seen in Ghost Fragment: Cabal 2, specifically these bits below:

A hologram of a spinning golden planet, in stasis, turning gently. You can see the storms moving over its face. But when the Commanders congregate below it, when they activate whatever controls are below, it changes. Fissures appear on its face. Is that their home? When the room empties I play with the controls, but it’s older, native technology that I don’t recognize at all.

For all their might and strength, for all that they have dug into Mars and flung up battle walls with the bureaucratic grimness of conquerors, I suspect they are fleeing from something. That within their hard shells and thousand-folded shields is a sharp seed of terror. But of what? Does something follow them? Should we fear it too?

These show that the Cabal fear, or don’t want to fight against something, but we don’t know what. I believe that ‘what’ is the Hive. Some Cabal probably saw some species that the Traveler visited fight back against the Hive, who has been chasing the Traveler wherever it may go.

One reason I believe that ‘what’ is the Hive is because of the King’s Fall Raid weapons, specifically the Silence of A’arn shotgun. 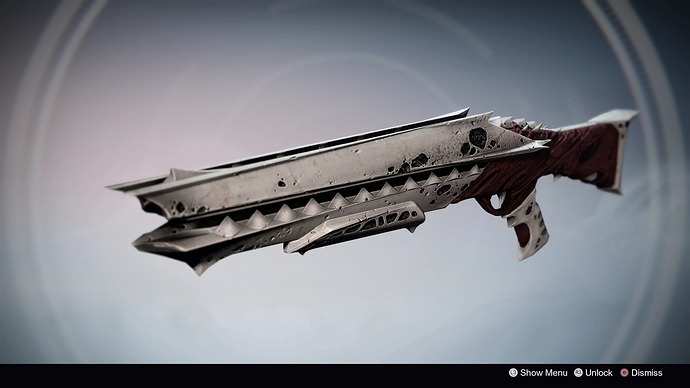 Primus A’arn was the leader of an unknown legion sent to fight against the Hive. He was Taken by Oryx. How do we know this? Because the weapon is a King’s Fall Drop, that’s how. Anyway, Ghaul probably knew him somehow (who knows… A’arn might be his dad for all the information we have now).
Ghaul also studies reports of the Traveler and places it has been.

For more proof that he was Taken, take a look at the Doom of Chelchis legendary scout rifle. 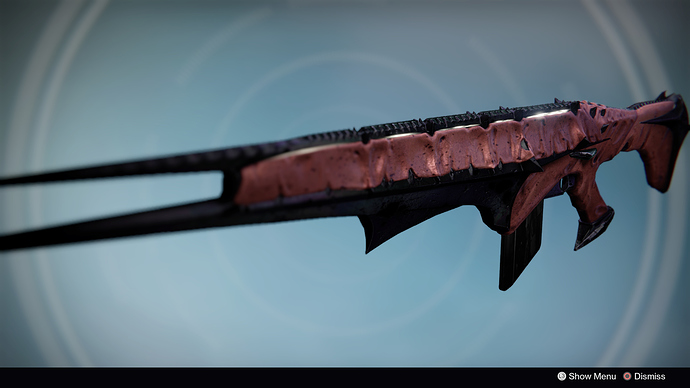 Chelchis was the Kell of Stone, one of the Houses of Eliksni that were either obliterated on their Homeworld or aren’t featured yet.

In conclusion to this part, does Ghaul want the Light to fight the Darkness?
Hopefully we get the answer soon.
One more thing before I leave: are these two pictures below one and the same? 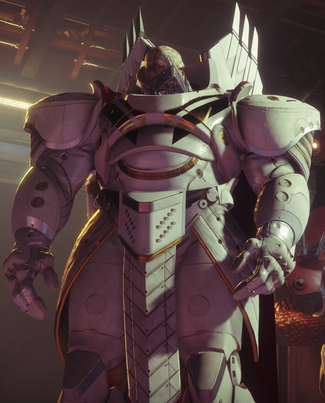 Is this Ghaul? (yes) 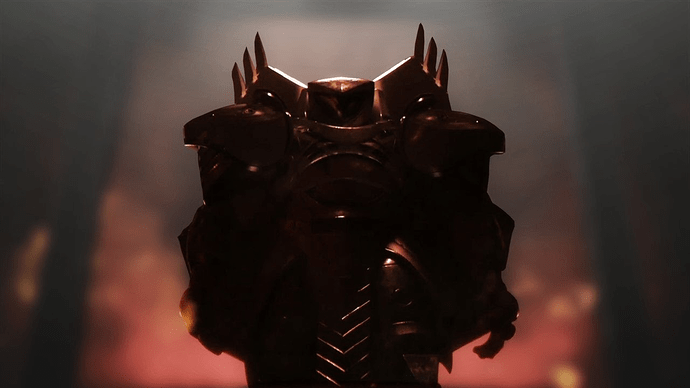 Thanks to @TheVoidwalker, they are both the same-

Part 4: Consul
Consul is the mentor/advisor to Ghaul. It is due to him that Ghaul overthrew the previous emporer, Calus, and forced him to exile.
This raises a question. Why did Consul want Ghaul to overthrow Calus? Were they related in some way? Classic brother vs. brother battle? Who knows?

Will he be a boss in Destiny 2 or its expansions?

This post was fantastic man!
Lots of research, valid speculation and good points!
One part bothers me though: Ghaul was raised while being taught about the Light?
He seems very old, so does this mean the Cabal have schools and children somewhere in their home galaxy?
And if so, does that mean that the Cabal in OUR galaxy have been relaying them information ever since they’ve arrived?

Thanks bro! My first post like this…and yes, I think that the Cabal have been relaying info back to the empire. As I said above, Ghaul studies reports about the Light and the A’arn issue. I’m trying to find the Grimoire Card I found earlier supporting this.

hello everyone, I just joined this forum after looking for a place to talk about destiny lore, hope I can contribute in any way.

Thanks @TheVoidwalker! I really look forward to your posts on Ishtar-Collective! I also recommend you check out Errata, here.

thank you!, I’m looking forward to talk with everyone, thanks for the link! I just got in time to look at the first post

I think you’ll fit in great!
Welcome to the club man!

Thank you! this looks like an amazing community and I’ll be glad to contribute in any way!

Cracking bunch of people even if they are all bonkers.

There’s clearly a lot of Lore I haven’t even touched on yet (my own fault - I’m pedantic so a lot of the time, I won’t read/forget to read a card I haven’t got yet).