This is more of just a question i’ve had since Forsaken. More specifically, the Oracle mission in the Dreaming City, where we’ve seen minions, even the children of Xivu Arath. Though they were Taken, most likely (or obviously depending on how you see it) by Savathun and/or Quria.

Anyway, question. Where is Xivu Arath and what is she doing? For being the “Hive Aspect of War,” she doesn’t seem to be caring about how Savathun’s (undeclared) war against us has affected her.

I know this is very similar to the Topic made by XxDredgenXAKAIxX, “Savathun, and Xivu Arath” (Savathun, and Xivu Arath), but it’s been a year since then, and apparently, after reading the newest lore book Inquisition of the Damned, she making another major move. This time with the Hidden Swarm. And now, with the clearing of The Shattered Throne at 999 power, done by Bagel4, if the way I think her “murder battery” works, she just got a TON of more tribute, making her way stronger.

She’s been laying bait to lead us to a trap. She’s manipulated almost everyone, the Hidden Swarm, Riven, …Uldren…, even us, Guardians who know what she’s doing. So, as I see it, we shouldn’t trust anything that mentions or involves her in any shape or form.

Oh, right, Xivu, got sidetracked. So, yeah, WHERE IS XIVU?

They probably look much like any regular old knight. I seem to recall there being very little to distinguish the sexes in the hive. I also do not think one is relegated to certain roles either, could be they are simply more likely to take a role as a knight if male or a wizard if female.

Well, I mean, Nokris and (I believe) Dûl Incaru are male and they look pretty different. That, and it appears the stronger/more ascendant a Hive is, the more different it is in appearance. Prime examples being the Oryx bloodline. They all look SUPER unique, so that might have an effect on appearance.

Dul Incaru is the Daughter of Savathun. Hashladun also looks different so your ascendancy=more unique look hypothesis might have some merit to it.

Yep. I think that the power = looks has some merit to it. For some reference, here is a regular hive wizard; 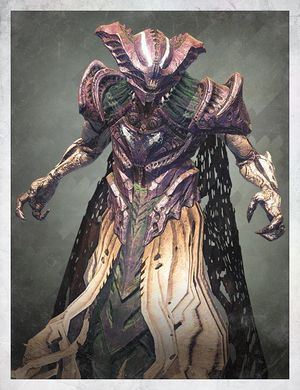 As you can tell, they have very different looks. Also, we have yet to see the model of Oryx, Crota, or Nokris used for anything but them. (Same goes for Hashladun and Dul Incaru) I bet that as they get more powerful, they begin to change shape to represent themselves, and nothing but themselves.

In post, I did realize using Nokris AND Dul Incaru at the same time for examples wasn’t exactly the best idea. Since, as you essentially said, they are from different bloodlines. But I couldn’t exactly think of anything better at the time, so…yeah.

There was a knight similar to Crota in the Kings Court arena on the Dreadnaught. Fanatic of Crota I believe his name was.

They are cousins, so you were not wrong in the bloodline aspect.

(Maybe) An even better example, think back to the extensions of Crota in D1 back in the Dark Below expansion. You know, like the Eyes and Hands of Crota. They all (except Omnigul) looked the same as to what they normally were except for a few additions to their physicality, and they were the extensions of the son of a Hive God who was very similar in looks to knights.

Forgot about him. They probably looked alike because the Fanatic of Crota was likely trying to imitate Crota, as his fight mechanic was the same as Crota. (Knock down with weapons, then damage with sword)

Yeah, I mean, it’s literally in his name, “The FANATIC of Crota.”

Anyway, back on track, what’s going on with Xivu Arath? Seriously. We’ve seen her children Taken, along with some of her own subordinates like the Might of Xivu Arath (or Wrath, I can’t remember off the top of my head), in the Dreaming City (the ogre spawns in the garden if my memory serves me right). And more recently, a nightmare related to her, “Jaxx, Claw of Xivu Arath,” (And before anyone asks, “how can we see this nightmare when we’ve never encountered it before?” Our guardian never knew any member of Eris’s fireteam, and yet we can see their nightmare counterparts).

Maybe. I just assumed that Savathun had something to do with it, since she has had recent Taken associated with her and her aspects have become more and more relevant in the game.