Creation of the Exos

In the Destiny: The Taken King Collector’s Edition, there is a book with Cayde’s (the human Cayde’s) notes and thoughts. When Cayde was a human, he worked for Clovis Bray. Let’s just say he keeps send up. Badly. So he gets sent on a job to Europa, which, if he doesn’t screw it up, will clean his record. We know it is at Europa because of his hand drawn note. That job makes him an exo.
‘I arrived flesh and bones. Gave everything to the ice. Started again.
Rebooted.’
Does this mean that exos are created on Europa? 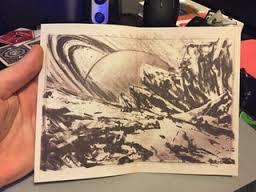 Are you suggesting that the deep stone crypt is on Europa?

I’ve long suspected that Exos were made on Europa. It is perfect, out of the way, and fits the description.

One would think the rings of the planet describe Saturn, not Jupiter. Mara Sov mentions “the cauldrons of Rhea” being a place the crows intruded upon, angering the Nine. Rhea is also a moon of Saturn and is primarily composed of ice. In my opinion, Rhea is just as strong as a candidate for thr birthplace of the Exos as Europa.

Don’t forget Jupiter has rings, as do Neptune and Uranus.

Uranus’ rings are highly distinctive because they are tilted as a result of the planet’s poles being reoriented from an ancient collision. My point being that this image is likely not showing Uranus.

Neptune does have rings but they are very thin and unlike the massive rings in the picture. I still think we are looking at image of Saturn. 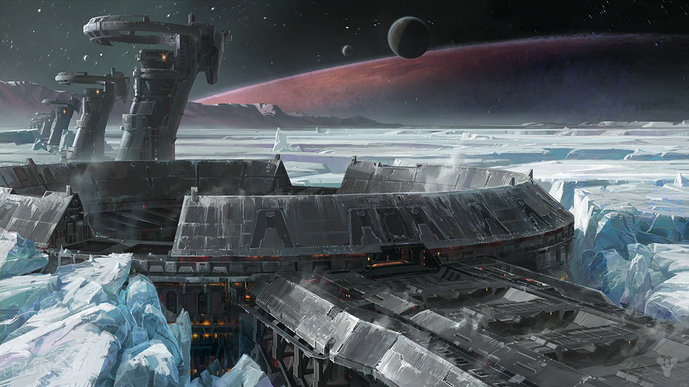 Destiny concept art for what I think is Europa?

Or Rhea I can’t tell if that’s Saturn in the background.

I have seen that concept art before. I think it was on a bungie post or something.

I think the nine inhabit Rhea because of this “More of your brother’s Crows have entered the Cauldrons of Rhea.” The Witch directly before her spoke with a dry buzz. “The Nine do not approve.”

It could be just that Rhea is in their territory.

Apparently, Europa is the nine territory as well because in this excerpt the nine it says this “The Nine are ancient leviathan intelligences from the seas of Europa or the hydrocarbon pits of Titan.”

Do you think the nine have somthing to do with the creation of the exos?

I think the Nine control both Jupiter and Saturn, with Jupiter as their primary base.

Don’t forget they also have Titan which is a moon of Saturn.

they can’t be. Leviathan died when the Hive destroyed him.

they can’t be. Leviathan died when the Hive destroyed him.

The Leviathan of the Fundament died, yes. The word “leviathan” in that grimoire card isn’t referring to a proper name or even a being of the same species. Since it’s not capitalized, it’s more likely it means the more typical definition of leviathan - “A large sea animal; something large or formidable.” That isn’t necessarily exclusive to the Fundament Leviathan.

Oh okay thanks. I’ll keep that in mind.

It is, Cayde says so.